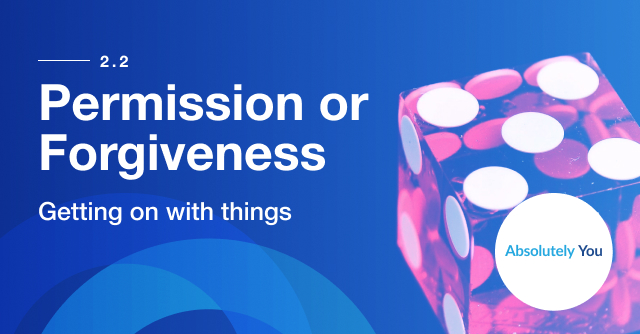 Nothing ventured nothing gained; or in the Aussie vernacular, ‘ave a go ya mug!

This pair of options fascinates me. Does it mean ignoring structure and process completely? If I’m for seeking forgiveness does it mean that I’m for expedience at the expense of sustainability? Some might say that acting without permission is anarchy. How can a business work if people break the rules. Others argue that being a slave to process and rules means we will miss opportunities. Who is right? Who is wrong? Which choice do you prefer?

Describing these alternatives as all or nothing speaks of a reality that happens in the moment. I doubt that anyone will say that seeking forgiveness is the best approach in all situations. If someone constantly breaks the rules then that is not good for teaming, for governance, or for structure. Similarly, if your need to act and circumstances don’t facilitate gaining approval and an opportunity might be lost, do you have the confidence to act on your own initiative? When to seek permission and when to seek forgiveness is the question.

Most stories of success involve some breaking of the rules. Are you comfortable doing that?

Whilst not being directly about the question of acting with or without permission, the following quote is one of the best I have encountered to describe the value of taking action, approved or otherwise. It's here to be enjoyed.

The Man in The Arena

"It is not the critic who counts: not the man who points out how the strong man stumbles or where the doer of deeds could have done better. The credit belongs to the man who is actually in the arena, whose face is marred by dust and sweat and blood, who strives valiantly, who errs and comes up short again and again, because there is no effort without error or shortcoming, but who knows the great enthusiasms, the great devotions, who spends himself for a worthy cause; who, at the best, knows, in the end, the triumph of high achievement, and who, at the worst, if he fails, at least he fails while daring greatly, so that his place shall never be with those cold and timid souls who knew neither victory nor defeat.”