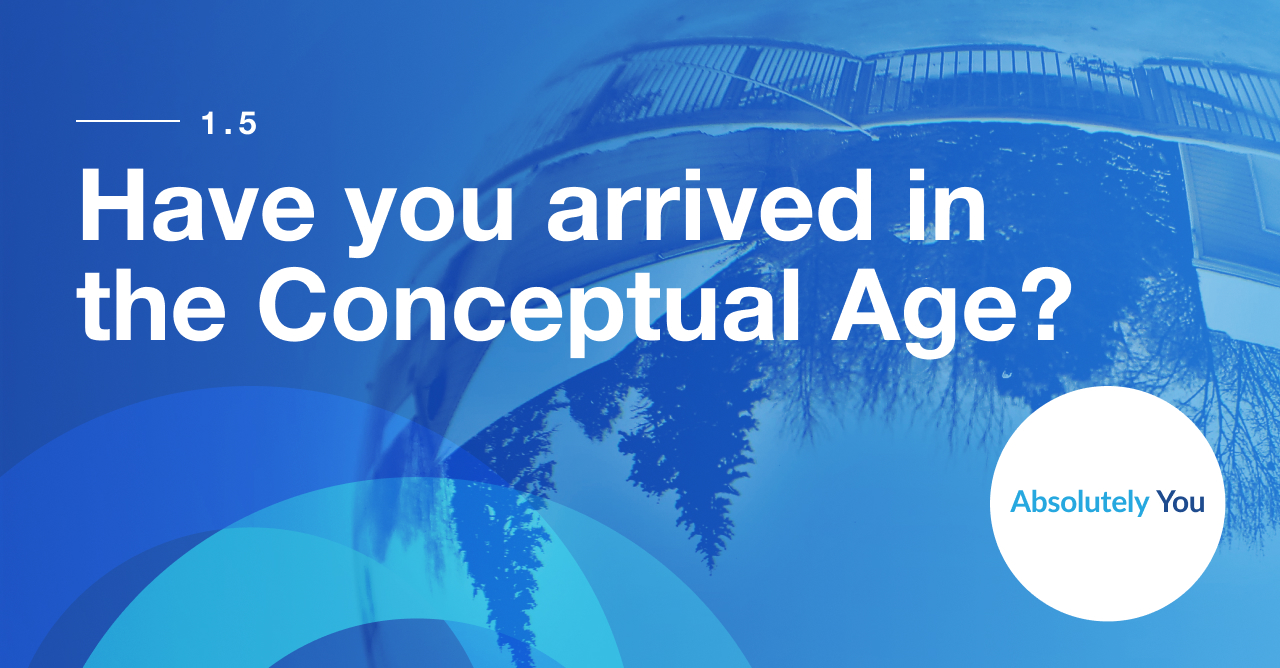 I owe the questions on this page to the insights of Dan Pink.

If we look at the last millennium we can see the arc of evolution from an Agrarian Age, to an Industrial Age. Imaging the challenge for the Parochials and the Cosmopolitans in coming to grips with that change! From The Industrial Age we’ve moved into a Knowledge age that is already becoming (some will see it as already being today’s reality) a Conceptual Age. Dan Pink describes this as an age of high concept and high touch. High concept involves the capacity to detect patterns and opportunities, to create artistic and emotional beauty to craft a satisfying narrative and to combine seemingly unrelated ideas into something new. High touch involves the ability to empathise with others, to understand the subtleties of human interaction, to find joy in one’s self, and to elicit it in others and to stretch beyond the every day in pursuit of purpose and meaning.

On the trip through this book I expect that this paragraph will often resonate. Pink’s book “A Whole New Mind” was a milestone in my journey. It doesn’t surprise me (in fact I think it reinforces the emergence of a conceptual world) that around the same time that this book was being written Sir Ken Robinson delivered his TED piece on changing the structure of education to embrace the arts, to be more conceptual. In that extremely entertaining as well as informative talk – a must watch if you haven’t yet – Sir Ken points out that the curriculum of today is the one built to facilitate the Industrial revolution. The concept of Ages and where we are couldn’t be clearer. Not surprisingly many of our business models share this genesis.

Over this same arc of time the focal point of why a business exists has evolved. Through the 1980’s and 90’s where a sharper view of being driven in the interest of shareholder primacy and Total Shareholder Return emerged. Now we’re seeing the emergence of stakeholder primacy that is playing out in the growth of Not for profit organisations and Social enterprises. In common with the Ages with which we have identified, the changes are coming more quickly, each phase is shorter than the one before.

Where are you on this journey? Do you believe we should work for the collective good, or to provide a return to the money that was used to bring our corporations to life?

You might also find an answer in a consideration of Communism and Capitalism as labels for these alternatives. On the scale of world history Communism was but a dot – 72 years from 1917 to 1989. We are now seeing that unbridled Capitalism is not much better for the collective with its rapacious concentration of wealth and power in such a small portion of society. The irony of the connection of capitalism with democracy is not to be lost. The emergence of Social Enterprise and Not-For-Profits makes sense against this backdrop.

Another way to look at this is through Richard Thaler’s description of us behaving as Econs or Humans. Econs are the people described in Economic Theory. They are super-smart, rational, with well-defined preferences and a desire to maximise utility. Humans, on the other hand, are flawed, they show biases in behaviour, they are emotional social animals and are not driven purely by a need to maximise outcomes in economic terms Do you lean toward the Econ living in the knowledge age, or the human living in the Conceptual Age? For many years I worked with an image of the sun at my desk with the phrase "the heart can see further than the eye". I don't recall my source for this wisdom and looking now I see that albeit in slightly different forms, it appears in many stories and sources. It provides a clear view of my biases and I hope a view of how you choose to engage with our world.

Which is your world?